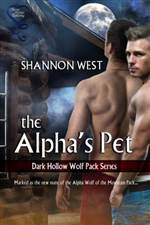 Nicky Anderson is living a normal, if hectic life as an artist and part time waiter in a large city, when he’s attacked by a mugger who slashes his throat. When he awakens, he’s naked, and surrounded by large, muscular men. Nicky feels an immediate attraction to Marco, the most handsome man Nicky has ever seen, which is strange, since Nicky is straight. His attraction is overwhelming and downright embarrassing as he licks the man and tries to climb all over him. He soon discovers he’s the newest “pet” of the Mountain Wolf Pack, and Marco is his new master. Saved from certain death, has he exchanged one horrible fate for another? All he knows is that he’s in heat for this beautiful man. When he learns his new master is a wolf shapeshifter who demands his love and obedience, he begins to wonder just what he’s gotten himself into.