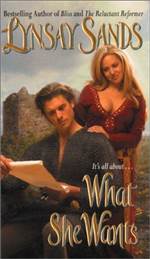 Storyline What She Wants :

A formidable Scottish knight used to getting his way, Earl Hugh Dulonget of Hillcrest has gotten himself into a bind. His uncle's will clearly states that Hugh must marry— yet he has just insulted his would-be bride by calling her a peasant! Now he must do whatever it takes to win back the fair Willa . . .

Everyone has advice, it seems. His comrades-in-arms believe gifts and baubles will earn her love. The old witch who was her guardian wants Hugh to crawl back to Willa on his belly. And his castle priest suggests he read De Secretis Mulierum, a book on the secrets of women. But Hugh knows only one sure way to overcome her reluctance: he must convince Willa that his passion and devotion are not only what she needs, but what she wants more than anything else in the world.