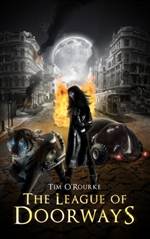 The League of Doorways

Storyline The League of Doorways:

The League of Doorways (Doorways #2)

With a werewolf and a vampire for company, Zach Black makes his way across a vast apocalyptic wasteland in search of the box which contains the Heart of Endra. In the desert, they stumble across a mechanical man who tells Zach and his friends that if they want to reach the box, they will have to cross a desolate land inhabited by terrifying creatures, which have been smuggled from the other side of the doorways.

But with a traitor amongst his midst, Zach’s every step is being planned and manipulated by the evil sorcerer, Throat. As Zach makes his journey, little does he know he is being led into a trap which could ultimately lead to his death and the destruction of the world he has promised to save.