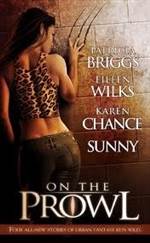 Storyline On the Prowl:

Alpha and Omega 0.5 by Patricia Briggs
The werewolf Anna finds a new sense of self when the son of the werewolf king comes to town to quell unrest in the Chicago pack- and inspires a power in Anna that she's never felt before.

Inhuman by Eileen Wilks
Kai has a secret gift of sensing thoughts and desires. What she senses in her neighbor Nathan could be dangerous. Because he has a secret gift, too, and it's about to be let loose.

Buying Trouble by Karen Chance
In a New York auction house, a Lord of the Fey crosses paths with a fiery redheaded mage named Claire. But in this strange underground society, the rarity up for sale is Claire herself.

Mona Lisa Betwining by Sunny
Among the children of the moon, Mona Lisa is of Mixed Blood- part Monere, part human, and destined to be alone. Then she meets a man who could be her salvation- or her downfall.