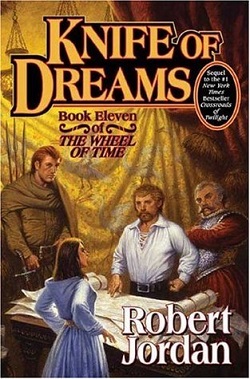 Storyline Knife of Dreams (The Wheel of Time #11):

The sun, climbing toward midmorning, stretched Galad’s shadow and those of his three armored companions ahead of them as they trotted their mounts down the road that ran straight through the forest, dense with oak and leatherleaf, pine and sourgum, most showing the red of spring growth. He tried to keep his mind empty, still, but small things kept intruding. The day was silent save for the thud of their horses’ hooves. No bird sang on a branch, no squirrel chittered. Too quiet for the time of year, as though the forest held its breath. This had been a major trade route once, long before Amadicia and Tarabon came into being, and bits of ancient paving stone sometimes studded the hard-packed surface of yellowish clay. A single farm cart far ahead behind a plodding ox was the only sign of human life now besides themselves. Trade had shifted far north, farms and villages in the region dwindled, and the fabled lost mines of Aelgar remained lost in the tangled mountain ranges that began only a few miles to the south. Dark clouds massing in that direction promised rain by afternoon if their slow advance continued. A red-winged hawk quartered back and forth along the border of the trees, hunting the fringes. As he himself was hunting. But at the heart, not on the fringes.

The manor house that the Seanchan had given Eamon Valda came into view, and he drew rein, wishing he had a helmet strap to tighten for excuse. Instead he had to be content with re-buckling his sword belt, pretending that it had been sitting wrong. There had been no point to wearing armor. If the morning went as he hoped, he would have had to remove breastplate and mail in any case, and if it went badly, armor would have provided little more protection than his white coat.