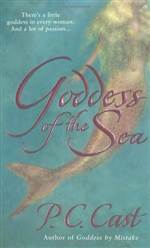 Goddess of the Sea

Storyline Goddess of the Sea:

Goddess of the Sea (Goddess Summoning #1)

On the night of her twenty-fifth birthday, alone in her apartment, Air Force Sergeant Christine Canady wished for one thing: a little magic in her life. After drinking way too much champagne, she performed, of all crazy things, a goddess-summoning ritual, hoping that it would somehow make her life a little less ordinary...but she never believed the spell would actually work.

When her military plane crashes into the ocean, CC's mission overseas takes an unexpected turn. She awakens to find herself in a legendary time and place where magic rules the land—occupying the body of the mythic mermaid Undine. But there is danger in the waters and the goddess Gaea turns this modern, military gal into a beautiful damsel so that she can seek shelter on land.

CC is soon rescued (literally) by a knight in shining armor. She should he falling in love with this dream-come-true, but instead she aches for the sea and Dylan, the sexy merman who has stolen her heart.