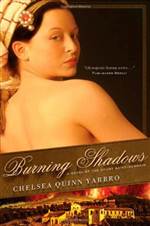 In Burning Shadows, Yarbro looks at the legendary Huns from the perspective of the people who faced the brunt of their attacks. The vampire Saint-Germain seeks sanctuary at an isolated monastery, unwilling to abandon the hundreds of terrified villagers he has led in flight from the Huns. A few Roman soldiers and some village Watchmen are the monastery's defense force - and they are undermined by the religious fervor of some of the monks, who argue that since everyone's fate is in God's hands, it is foolish to defend themselves. In the hothouse atmosphere of the high-walled monastery, Saint-Germain must take special care when slaking his vampire thirst, for discovery of his True Nature will result in his True Death.