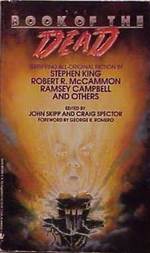 Book Of The Dead

Storyline Book Of The Dead :

Book of the Dead

In a February 16, 2008 interview with cinematical.com, George A. Romero reminds us, “There was a collection of stories called Book of the Dead, in which horror and science-fiction writers came together and wrote short stories about what was happening to other people on that first night (as depicted) in Night of the Living Dead.”

Noted authors such as Joe R. Lansdale, Stephen King, Robert R. McCammon, and Douglas E. Winter use their macabre vision to bring us those stories. Forwarded by the Godfather himself, this anthology imbeds itself in the cannon of zombie lore.