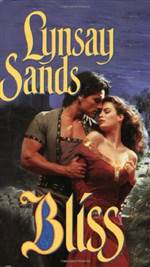 Something had to be done. It had gone on too long, and if King Henry received one more letter from either of the feuding nobles, he'd go mad. What Lady Tiernay needed was...well, she was a beauty, but whoever married the nag would truly get a mixed blessing. And Lord Holden-could all the rumors regarding his cold heart be lies? The man certainly had sobered since the death of his first wife.

If he were smart, Henry would force the two to wed, make them fatigue each other with their schemes and complaints. Yes, it was only fitting for them to share the bed they made-'til death did them part! Who could tell, perhaps they would even find each other suitable; perhaps Lord Holden would find in his bride the sweet breath of new life. Heaven alone knew what would happen when two foes were the last things between themselves and the passion they'd never known they wanted.