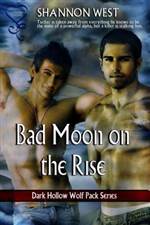 Bad Moon on the Rise

Storyline Bad Moon on the Rise:

Living on the Gulf coast of Florida, Detective Tucker is investigating a series of strange, violent murders. Encountering a gorgeous stranger named Gavin in a bar, his attraction is powerful and immediate, but he learns the man is somehow involved in the savage killings that have already taken three lives. After an argument with Gavin sends Tucker to the beach to figure things out, he is attacked by a savage creature, and almost killed except for the intervention of a fierce animal that looks like a wolf. When he wakes up in Gavin’s hotel room he’s told that he’s not who he thought he was all his life, but a natural pet of the Dark Hollow Wolf pack. He wants to run, but if Gavin catches him, he’ll be taken away from everything he’s ever known and thrust into an alien world to become the mate of a powerful alpha.