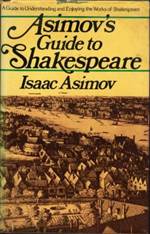 Asimov's Guide to Shakespeare, by Isaac Asimov, vols I and II (1970), ISBN 0-517-26825-6; Maps by the artist Rafael Palacios. This work gives a short guide to every Shakespeare play, and also his two epic poems. Asimov organizes the plays as follows: Greek Roman Italian The English Plays The last two categories are treated broadly; 'Italian' applies to neighbouring countries, and both Hamlet and Macbeth are listed with 'The English Plays'. Asimov gives a detailed justification for doing this. Within each category, the plays are arranged chronologically, making allowance for the several not based on actual events. Asimov notes how much is real history, and describes who the original people were, where applicable. He traces those characters who appear in more than one play, and provides maps to explain key geographical elements.