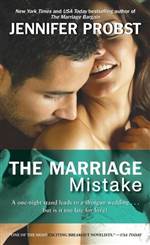 The Marriage Mistake (Marriage to a Billionaire #3)

Storyline The Marriage Mistake (Marriage to a Billionaire #3):

The Marriage Mistake (Marriage to a Billionaire #3)

Carina Conte has had a crush on her brother Michael’s best friend, Max Gray, since she was a teenager. Now she’s earned her MBA and come to work at Michael’s new venture, America’s fastest-growing bakery empire. But some things never change: her family still treats her like a child. With three drop-dead gorgeous siblings, she’s still the ugly duckling of the bunch. And Max, the company’s new CEO, still barely notices her.

Max knows Carina Conte is strictly off limits. But hot-blooded lust wins out at a conference when the two share a scorching one-night stand—and are busted by her mother! Now, forced by old-world Italian tradition into a marriage he’s not ready for, Max is miserable—and Carina is furious. Her new husband is about to realize that hell hath no fury like a woman transformed….